For Heather Locklear and Tommy Lee, the language of love has a sound all its own. Listen: Last fall Lee, the drummer for the heavy metal band Mötley Crüe, was on tour. He called Locklear, the Dynasty vixen he had been dating for six months, from Bloomington, Ind. and held the receiver next to his left forearm. Halfway across the country, Locklear heard the hum of a tattoo needle as it etched a big black rose ribboned with Heather’s name into Lee’s flesh. “I hadn’t seen her in a long time,” explains Tommy.

When Locklear, 24, and Lee, 23, plighted their troth in a lavish ceremony at the Santa Barbara Biltmore on May 10, it was the culmination of one of the more unusual courtships in celebdom—a white-lace-and-promises demonstration of the notion that opposites attract. A self-described “rock pig,” Lee is the living incarnation of the naughty-boy ethic. His lanky body (festooned with six tattoos in all) runs on Jack Daniels and Marlboros; he teases his long black hair and adorns himself with bracelets and black leather. Locklear is Beauty to his Beast. All giggles and blond mane, she is a G-rated pinup dream—a TV phenom (on both Dynasty and T.J. Hooker) whose multimillion-dollar career hasn’t impinged on her Val Gal simplicity. Raging dissonance aside, however, the couple oozes harmony. “I’ve only thought of getting married once,” says Locklear. “I plan for this one to last.” Said the groom on his wedding day: “I’m the happiest I’ve ever been.”

While prenuptial revels included a lingerie-and-sex-toy shower for Locklear and a bachelor party with 15 bikinied mud wrestlers for Lee, the wedding was slightly more sedate. It was held in a palmy courtyard bedecked with gardenias and tulips. Some 500 guests looked on as Lee, who wore a white leather tux, smacked gum on his way up the aisle. He tossed the gum into the bushes before the bride made her entrance. Wearing a skintight mermaid-style dress (that’s a different dress on the cover), Locklear giggled through the nondenominational 40-minute ceremony, which featured a lengthy kiss accompanied by the release of a dozen white doves.

As she was sipping champagne before the reception (with its Mötley Crüe tunes and no-holds-barred buffet) Locklear exulted, “It’s so exciting. I can’t believe it’s all happening….”

It had, indeed, been a courtship dizzying enough to disorient the most sanguine soul—beginning, as it did, just over a year ago at an REO Speed-wagon concert at L.A.’s Forum. Both were backstage with friends, and Tommy asked for an introduction as soon as he spotted Heather. “I was so shy I couldn’t possibly have gone up to her myself,” he says, “but it was Heather or bust.” The two chatted briefly, and Heather (who had barely heard of Mötley Crüe) formed the impression that “he looked great.”

Romance didn’t blossom until the woman who plays scheming Sammy Jo on Dynasty made her next visit to the dentist. Hollywood being what it is, the doctor had heard that a lovestruck member of Mötley Crüe was trying to reach Locklear. Soon afterward, her manager reported that a caller had been barraging her office, pleading for Heather’s telephone number. “I had called like a million times,” admits Tommy. “I wanted to send her flowers or invite her to something…anything just to talk to her.”

Lee was in luck. Scott Baio, Heather’s beau two years ago, was a fling of the past, as was actor Mark Harmon (who, after their entanglement, described Locklear as “an emotional cup of coffee”). Tom Cruise—whom Heather declines to discuss on the grounds that “it’s not ladylike to talk about previous romances”—was nowhere in evidence, and Lee had piqued her interest. When he finally got through, Locklear reports, “We talked for hours. After we hung up I got a phone call back. It’s Tommy, and he says, ‘Turn on the TV—you’re on right now.’ I hadn’t been doing Dynasty much, and it was Wednesday night, and I immediately knew he thought I was Heather [The Fall Guy] Thomas.”

Magnanimously, she forgave him, and the two met three days later. Both say that their first date—dinner at an Italian restaurant and the late show at the Comedy Store—was the clincher. When Lee arrived at Locklear’s Tudor house in Tarzana, he looked every inch the motley rocker. “I came downstairs,” recalls Heather, “saw Tommy and ran back upstairs to make my hair wilder. It was great.” Lee, for his part, was already smitten; as soon as Heather agreed to see him, he made a jubilant phone call to his mother. “The first time I saw Heather I got so flipped out I think I lost part of my mind,” he says.

Not that Mrs. Lee’s only son was a naif; he had been married in 1984 to model Elaine Bergen (a union that ended after 30 days) and, as a Crüe member, had seen his share of debauchery. The band’s official biography says, “Mötley Crüe isn’t simply a musical project; it’s more a philosophy, a way of life. All things to all men and a lot more to all women.” Aside from the usual complement of willing females, the group has attracted a reputation as a cadre of devil-worshipers whose riotous living and determined drinking rivals that of, say, Keith Richards in his prime. Public scandals—including lead singer Vince Neil’s conviction last year for vehicular manslaughter and drunk driving (which cost him $2.7 million in financial restitution and resulted in five years’ probation)—have done nothing to curb their popularity with pubes-cents. Their two most recent albums both went platinum, and the band’s 1985 tour was a sellout.

When Locklear entered the picture, the boys were about to climb back onto the tour bus, a peripatetic playpen that Tommy terms “pretty wild.” Says Lee: “I mean, I work for an hour and 40 minutes a day. I have another 22 hours to play. I shouldn’t really say that much, but you can probably imagine some of the things that are going on.”

As it happened, however, the wide-eyed Heather fit right in. The stories about satanism didn’t trouble her—”Tommy doesn’t worship the devil, he worships me,” she laughs—and the commoner forms of hell-raising weren’t a threat. “What those guys do on the road when I’m not around is all fine and dandy,” she says. “I’m not worried.” Three months after they met, Locklear proposed in a Dallas hotel room. Lee was incredulous. “I said, ‘Now, don’t say that kind of stuff unless you mean it,’ ” he remembers. “I didn’t want to be heartbroken.”

He wasn’t. On Christmas Eve the two celebrated their engagement in a typically abandoned manner: Riding in a limousine along the Ventura Freeway, they stood up and poked their heads out of the sunroof. Eyes watering, hair flapping in his face, Lee placed a 2.3-carat diamond ring on Locklear’s finger and yelled, “Will you marry me?” “Yes!” she shouted.

For all their superficial differences, Locklear and Lee have more in common than it may appear. Both Californians, they come from close families whose modest backgrounds contrast wildly with their own quick-rise wealth. Daughter of Bill Locklear, who directs the registrar’s office at UCLA, and wife Diane, who calls herself “the original Valley Girl,” Heather was raised in suburban Thousand Oaks as the youngest of four children. As a rambunctious freshman at UCLA, Locklear once took a failing grade in drama class rather than recite a monologue in front of other students. Nevertheless, she was discovered in another acting class by her current manager. Never mind that she’s now in her fifth season of Dynasty, her fourth in T.J. Hooker, and her third as a high-paid spokeswoman for a chain of health clubs. “[None of it] has changed her any,” claims mom Diane. “She’s very down to earth.”

So is Lee—at least according to mother Boula, a loyalist who has attended every one of the band’s L.A. shows. Born in Greece (where Boula won the Miss Athens title in 1957), Tommy was brought to America in 1965, when father David, now a shop superintendent for the L.A. County road department, took a job in Covina. With his sister, Athena, now 21, Tommy went to South Hills High School, where he eventually was expelled for refusing to attend any classes save coed volleyball and shop. Music was his salvation. He enrolled in every drum corps and marching band that would have him, and—after managing to graduate from Royal Oak High—bounced around L.A.’s club circuit until he met up with the band that became Mötley Crüe. His professional fortunes rose as quickly as Locklear’s; the group’s first album sold 800,000 copies and the Crüe quickly became the symbols of heavy metal decadence. For all of that, says Tommy’s mother, the boys are anything but satyrs. “They’re great,” she says. “They’re like my own kids—they all call me Mom.”

Both sets of parents profess to be delighted by the only-in-Hollywood marriage—although in the Locklears’ case, their daughter’s choice of someone who collects art on his skin rather than his walls had its initial shock value. When Heather’s dad called her last summer before dropping by for a visit, new boyfriend Tommy, who was lounging bare-chested by the pool, hastily tried to modify his look. “I’m pulling earrings out, putting on a long-sleeve shirt, and when he comes in I’m sitting like a gentleman on the couch,” Lee says. Bill Locklear was still taken aback (“Who does he belong to?” he asked Heather and sister Colleen, then a roommate), but not for long. “Tommy’s just a real up and warm person,” Diane explains.

“They’re perfect for each other,” exults Lee’s mother. “The only thing I told Tom is to treat her like a lady, love her and respect her, because she’s not one of those groupies. I never liked groupies; I’m a mother.”

After a three-week honeymoon in the Cayman Islands, Locklear and Lee intend to move into a lavish Tudor house in Woodland Hills, with a swimming pool and three waterfalls. There, they plan to re-create the domestic tranquillity that marked their two months of cohabitation at Heather’s. A typical morning for these two begins in the early afternoon. Locklear opens wedding presents, and Lee prepares a late breakfast of scrambled eggs and sausages. Three silky terriers scamper about the house, which bears evidence of the couple’s separate pursuits: gold and platinum albums on the walls, a tanning machine and a drum set in the living room, an eight-track recording system and Heather’s weights in the study. Eventually, Tommy heads off to a rehearsal. ” ‘Bye, honey!” he shouts from behind the wheel of his silver-and-beige Corvette. “Time to go make some noise.”

With the wedding behind them, Locklear and Lee will settle into the business of growing old together. It is a scenario they relish. “I think we’ll be the coolest grandma and grandpa in the world,” says Lee. “We’ll be like 85 or 90; I’ll still be a rock pig, and Heather will still be gorgeous.” 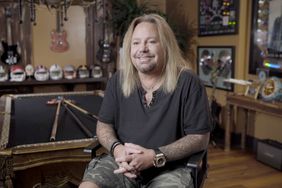 A Change in the Heather