Over the years, Katie Couric has proven pretty adept at sniffing out breaking news stories. So how could she miss a life-changing event staring her in the face?

Last weekend, on a beach in East Hampton, N.Y., as her boyfriend of more than a year, finance executive John Molner, opened a bottle of rosé and began telling her how committed and in love he was, Couric remained unfazed. “I was like, yeah, I know that. You didn’t have to bring me here to tell me that,” she says with a laugh. Finally, Molner cut to the chase. “Couric, I’m trying to propose to you,” he said, getting down on one knee in the sand. “I was stunned,” she says. “I had no clue! It took a long time for my brain to process what was going on.” Her groom-to-be, at least, is thrilled to have caught her off-guard. “I was very old-fashioned in how I went about the proposal,” Molner, 50, explains. “And it was a surprise to her. I was excited to catch her in a moment of confusion, which is pretty rare.” But Molner has been sure of his intentions for quite some time. “Meeting Katie really changed my life,” he says. “I’ve loved getting to know her and her daughters, and I couldn’t be happier. When she said yes, I was just elated. It was a great culmination to one of the best periods of my life.” Couric, 56, still “gobsmacked” when she looks at her left hand, continues to swoon days later. “I’m a little overwhelmed. I have to take a moment,” she says at one point, clearing her throat. “It’s an incredibly special time.”

For Couric, the engagement is significant, and not simply for the heartfelt display of emotion. Fifteen years after losing her 42-year-old husband, Jay Monahan, to colon cancer, Couric admits that preparing for another wedding is bittersweet. “I had such a happy marriage. I loved my husband so much,” Couric says of Monahan. “It’s nice for me to finally meet somebody who has so many of the values that he had. That’s been a real comfort. I made sure to call Jay’s siblings – and he was one of seven kids – and they were all so happy for me. That made me even happier, that they were all so thrilled. It sort of feels like it gives me permission to feel the way I do now.”

Having raised daughters Carrie, 17, and Ellie, 22, on her own, Couric is now excited for the next chapter in her life. “The fact that we’ve been the Three Musketeers for nearly 16 years means that change – even a positive one – can be challenging,” she acknowledges. “But I think the overwhelming feeling is one of joy.”

It’s joy she’s waited on for a while. In the years since Monahan’s death, Couric made no secret that she “always wanted to marry again. In a way I’m surprised it took 15 years, but things happen when they’re supposed to,” she says. “After Jay died I always stayed on my side of the bed and filled it with books and magazines and newspapers. They were like a symbolic placeholder for me. It’s nice to have a loving partner there instead. And know that he’s completely committed, come hell or high water.”

Certainly Couric has seen both. Poised to launch the second season of her syndicated daytime talk show Katie on Sept. 9, her career and her girls have been her focus for the past two decades. After leaving the Today show in 2006, she became the first solo female anchor of the CBS Evening News, a job she left in 2011. Along the way, tragedy struck again: Her sister Emily died from pancreatic cancer at age 54 in 2001, and in 2011 her 90-year-old father, John, died after a long battle with Parkinson’s. “It makes you realize that everyone is terminal,” Couric says. “And you have to make the most of the time you have.”

For Couric, that included making her intentions clear. “I made this a priority,” she says of finding a mate. “I had a series of relationships in the past, but they didn’t seem right for the long haul. And so it took me a while to get here, but I knew this is where I wanted to be. I would let my friends know I wanted to meet someone. When they didn’t deliver, I asked them again and again. Finally a friend told me she had this guy she wanted me to meet named John Molner, and every time I saw her at spin class I’d say, ‘Molly, what happened to this Molner guy?’ ”

Finally the Molner guy, head of mergers and acquisitions at investment firm Brown Brothers Harriman, materialized. To hear him tell it, “I fell for Katie as soon as I met her.” Couric was similarly smitten, if also pragmatic. “I knew he was a keeper when he agreed to go to the grocery store with my mom and me, and he helped her find a generic version of her pain reliever for less money. Mom’s a big bargain hunter, and John rose to the occasion. I thought, ‘Wow, this guy is pretty great.’ ”

Of course, every relationship has its challenges. Molner has two kids from his previous marriage, one in college in Colorado and one still in high school in New York. Couric has Carrie at home for one more year; daughter Ellie lives in California. “John’s kids are great, and he’s a very devoted father to them,” Couric says. “He’s also very respectful of my bond with my girls. I’ve done stuff with his kids; he’s very close to mine. We’ll let things fall into place naturally. It’s not exactly a Brady Bunch situation because our kids are at a different point in their lives.” A wedding will likely wait until Carrie leaves for college. “I want to get her off into the world and enjoy her last year at home,” Couric says. Molner, for his part, is happy to go with the flow. “There are family logistics to consider,” he says. “But I’m ready to go whenever called.”

When she reports back to the set of Katie later this week, she’ll be sporting her new ring—and likely serving as an inspiration to more than a few women who might have thought 56 was too late for happily ever after. “Some of my friends have said this gives them hope,” Couric acknowledges. “I’d like to think it does. But I hope it also shows people that it’s never too late, not if you put yourself out there. My parents were married for 67 years. I know this is worth it.” 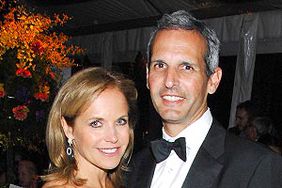