IT ENDED AS IT BEGAN, IN A CALIFORNIA courthouse. Just two years and 11 days after singer Paula Abdul and actor Emilio Estevez slipped into a Santa Monica judge’s chambers to say, “I do,” lawyers for the pair were filing papers in Los Angeles Superior Court making it clear that they don’t. “It’s with tremendous reluctance and great sadness that I’ve taken this action,” said Abdul, 31, in a May 10 statement announcing the split, which she initiated. “I have great affection and both personal and professional respect for Emilio. I know that we’ll continue to be supportive of each other.” Estevez, 32, who has a son, Taylor, 9, and a daughter, Paloma, 8, from a previous relationship, was equally magnanimous. “I have nothing but admiration, love and respect for Paula,” he said in his statement. “I’m sorry we weren’t able to come to a different conclusion.”

Why they couldn’t remains a mystery. Although Abdul cited “irreconcilable differences” in the divorce papers, some published reports linked the Mighty Ducks star with such ex-girlfriends as former New York model Marla Hanson, 32, and Los Angeles actress Karen Maslich, 29. Both women deny a current romance with the actor, but Maslich, who dated Estevez for nine months after meeting him on the set of Free-jack in 1991, says Abdul may have believed the rumors. Last fall, Maslich says, Paula angrily called her, in tears, to ask if her relationship with Emilio was more than a friendship. Soon afterward, Estevez broke off all contact with Maslich. “He was like, ‘We just have to say goodbye,’ ” she says. “He said, ‘I want to slick this [the marriage] through and work on it.’ ” By last week it seemed those good intentions weren’t enough. 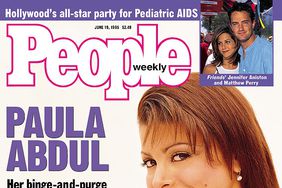